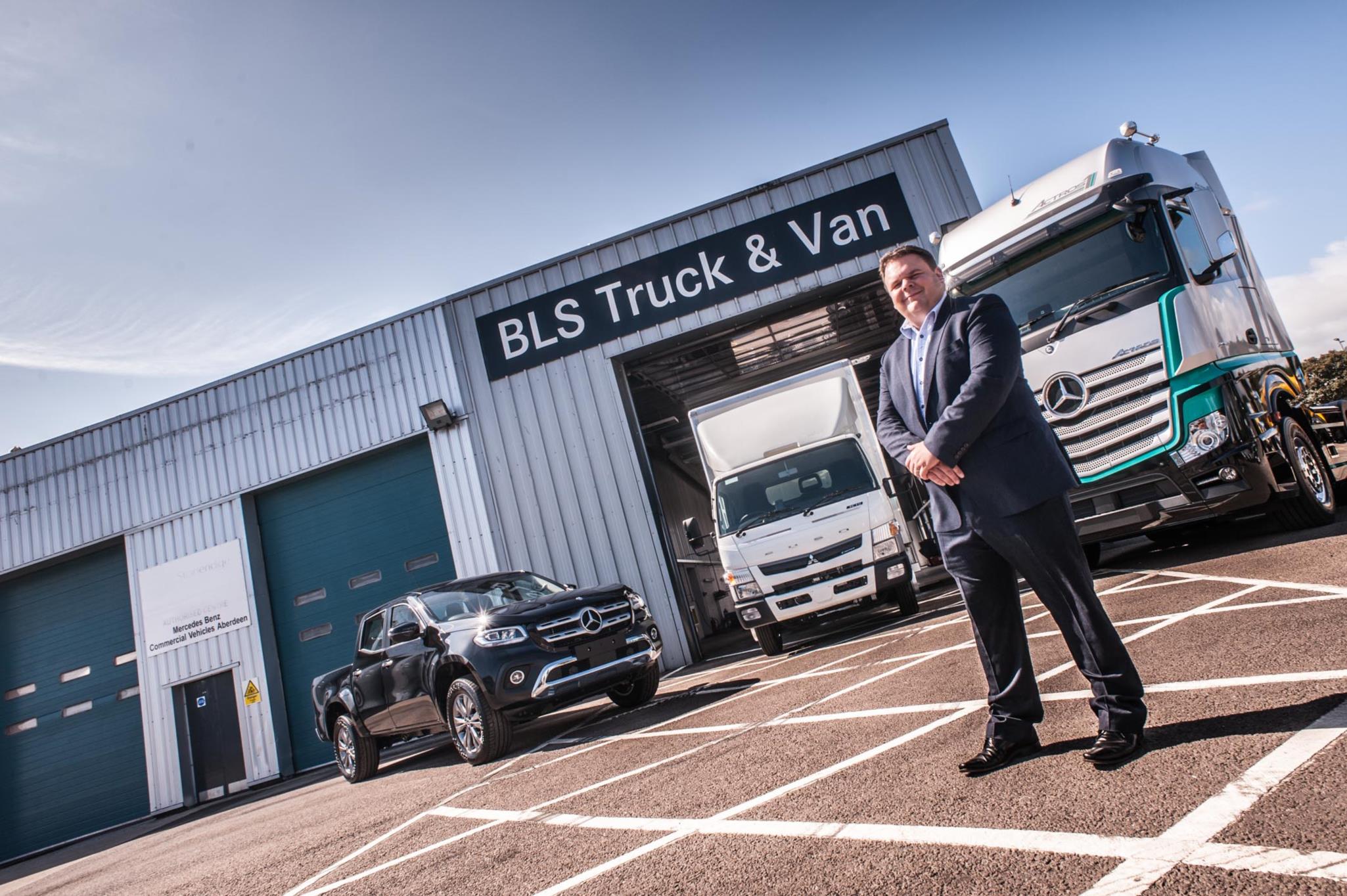 There’s a new name for Mercedes-Benz commercial vehicles in the north of Scotland, and BLS Truck & Van is already investing heavily to ensure it delivers the exceptional customer service that befits the legendary three-pointed star.

BLS Truck & Van began trading last week (2 July), at the dealership on Aberdeen’s Altens Industrial Estate which it acquired from the former franchisee for an undisclosed sum. In the weeks leading up to the opening the premises received a major facelift, the refurbishment programme including the installation of a new IT system, repainting of the workshop, and extensive line marking outside with clearly designated parking areas for truck and van customers.

The latest member of the manufacturer’s franchised network is a sister company to Bell Truck and Van, the Mercedes-Benz Dealer for the North-East of England – both are owned by Leo Group, a leading environmental, renewable energy and recycling company, which also has extensive interests in the meat industry.

Although Ben has now chalked-up 18 years’ service with the Mercedes-Benz brand, the Halifax-based Leo Group bought into the manufacturer’s Dealer Network as recently as last autumn. It has quickly made its mark – Bell Truck and Van’s vehicle sales tallies for the first six months of 2018 were double those achieved by the previous regime in the corresponding period a year earlier.

Leo Group is now determined to replicate this success story at BLS Truck & Van. With operations in the UK, Ireland, Europe and South Africa, the owner certainly has the financial muscle to fund the investments in people and infrastructure which will be crucial if BLS is to meet the manufacturer’s ambitious growth targets. 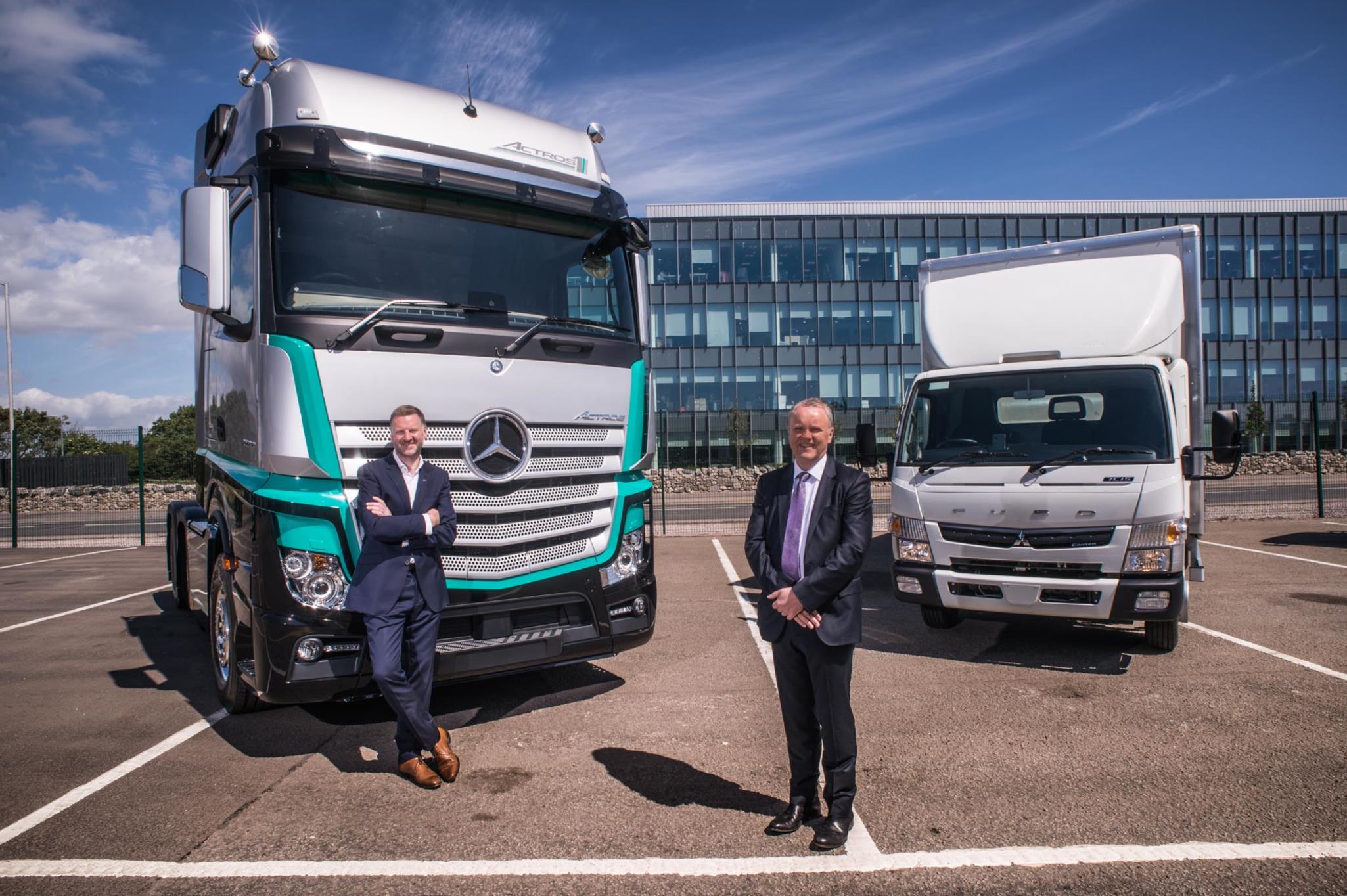 BLS Truck & Van has already made a number of key appointments, including those of Colin Birnie and Andrew Rennie, respectively, Head of Aftersales and Head of Truck Sales. Well-known figures within the road transport community in the north of Scotland, both served with the previous franchisee and won recognition from the manufacturer for their performances. Ben will shortly be recruiting a new manager to lead the van sales team.

Having launched its Aberdeen operation BLS Truck & Van now plans to develop a second branch as soon as possible, to serve customers in the Highlands. A shortlist of potential sites has been identified and negotiations are ongoing.

“We’re very excited about the prospects for BLS, as we’ve identified huge potential to grow this business,” declared Ben. “It represents a substantial investment, of course. But with our exemplary customer service, and the enthusiastic backing of our partners at Mercedes-Benz, I have every confidence that we can make it work.”

He continued: “It is a privilege to represent the truck and van industry’s most prestigious brands. I look forward over the coming weeks and months to meeting many of our Scottish-based customers, to reassuring them about our long-term commitment and outlining our vision of the future.”

The Aberdeen workshop – which incorporates an Authorised Testing Facility (ATF) now awaiting sign-off for truck MoTs by the Driver and Vehicle Standards Agency (DVSA)  – is operating initially on a single-shift basis. However, Head of Aftersales Colin Birnie is prioritising the recruitment of sufficient technicians to add a second shift, at which point the Service department will remain open until midnight during the week.

“The great thing about starting from scratch again is that we’re able to hand-pick our people,” he said. “The fabric of our Aberdeen dealership has been transformed over the last few weeks. It’s a great place to work and there are fantastic opportunities for motivated individuals with a ‘can do’ attitude.”

Colin added: “There is a real ‘buzz’ about the place. Everyone has rolled up their sleeves and pitched in with the refurbishment work. We’re all very positive and looking forward to delivering on the new owner’s ethos of customer service.”

Mike Belk, Managing Director, Mercedes-Benz Trucks, commented: “Ben, Andrew and Colin are three of the most accomplished professionals in our Dealer network. Under their outstanding leadership, and with the backing of Leo Group, BLS Truck & Van is perfectly placed to provide Mercedes-Benz and FUSO operators with an industry-leading sales service and back-up that reflects our Zero Tolerance on Downtime pledge.”

And Steve Bridge, Managing Director, Mercedes-Benz Vans, enthused: “BLS Truck & Van will be a great addition to our retail network. The introduction this month of an all-new Sprinter which sets new standards in terms of connectivity, and the launch earlier this year of the sensational X-Class pickup, makes this a particularly exciting time to be taking on a Mercedes-Benz Vans franchise.”