Anwen Construction has never been busier – so the County Durham-based firm has just commissioned its first FUSO Canter, to help it stay on top of current and projected demand for its groundworks services.

With many businesses reporting pandemic-related confidence issues, the family-owned operator’s Financial Director struck a refreshingly optimistic note. “We’ve plenty in hand right now and there’s lots more business out there,” said Damian Stevenson. “We’re currently tendering for work which, if it all came our way, would keep us going for five or six years. That scale of opportunity is unheard of.”

Established nearly 30 years ago by proprietor and Managing Director Andrew Bosomworth, Anwen Construction has a head office in Newton Aycliffe. It works primarily in the North-East but has also undertaken projects as far afield as the Scottish Borders and Manchester.

The latest addition to the company’s fleet arrived via local Dealer Bell Truck and Van. A 3.5-tonne Canter 3C13 model, it is fitted with a bespoke tipping dropside body built by Dependable Bodies, of Gateshead. 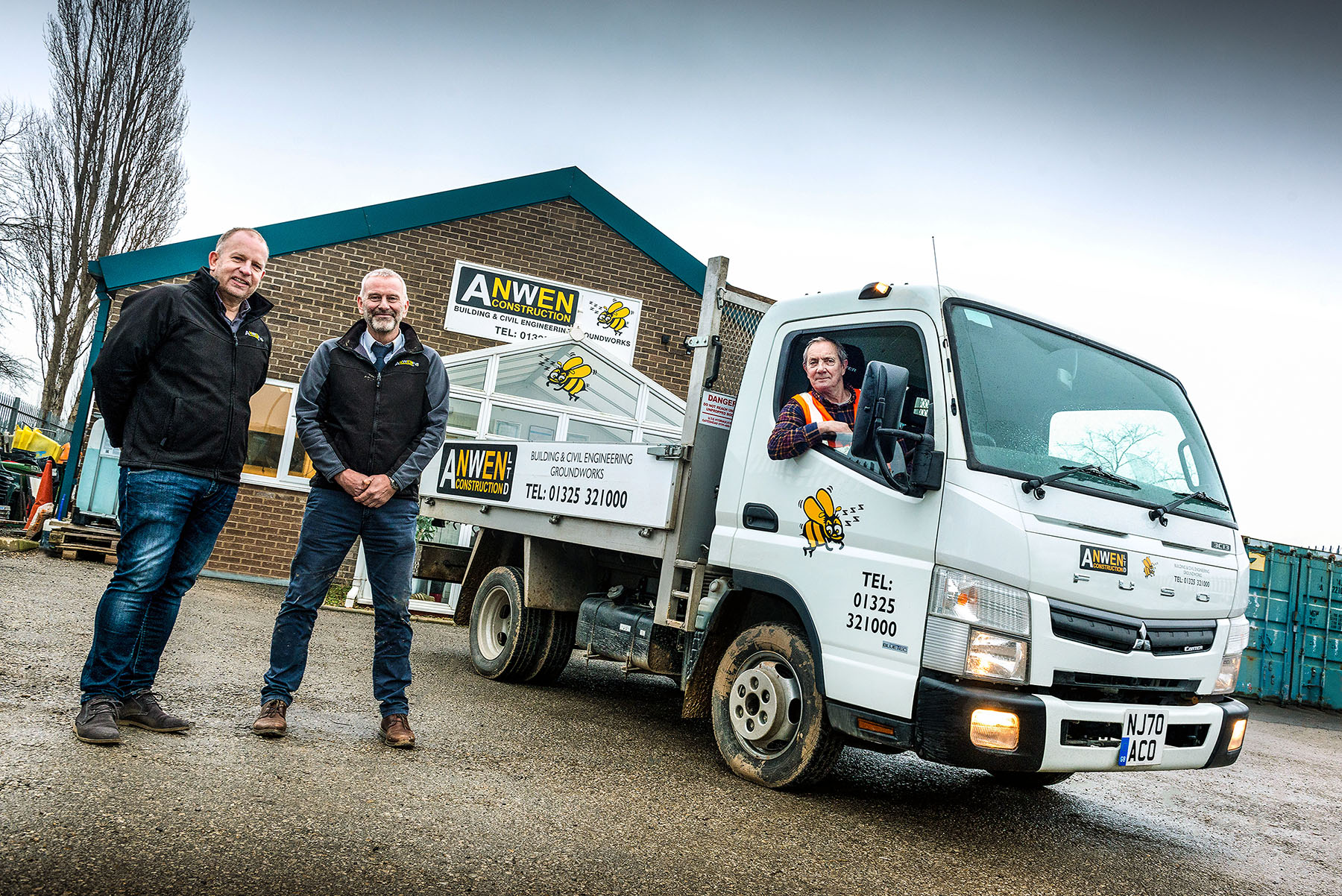 Anwen Construction acquired its new truck with the help of competitive funding from Mercedes-Benz Finance – like other FUSO Dealers in Britain, Bell Truck and Van also sells and supports commercial vehicles bearing the three-pointed star.

The operator also runs a number of vans and a pair of tippers by other manufacturers, one a 7.5-tonner, the other a 3.5-tonner. Whereas the latter has van-based underpinnings, the Canter – although it shares the same gross weight – is built around a rugged ladder frame chassis and has twin rear wheels.

“Given some of the rough sites on which we work its strength and durability were certainly key to the Canter’s appeal,” explained Mr Stevenson. “It’s as compact and manoeuvrable as a van, and any member of our team can drive it on a car licence. Make no mistake, though, this is a proper little truck, and we’ve bought it to do a proper day’s work.”

Anwen Construction’s Canter has a 2,500mm wheelbase – the shortest of the four available – and offers a highly competitive payload allowance of 980kg. Its fuel-efficient 3.0-litre common-rail turbodiesel produces 96 kW (130 hp) and 300 Nm of torque at 1,300-3,000 rpm, and drives through a five-speed manual gearbox.

Anwen Construction serves local authorities and other public sector clients, as well as industrial concerns. However, the company’s recent and anticipated growth owes much to its specialisation in the provision of fully supervised and quality-controlled sub-structure installations for private housing and retirement living developers.

The Canter is assigned to general duties and carries aggregates such as gravel and sand, as well as bricks and blocks, paving slabs and drainage materials, to and from sites. The operator anticipates running it for at least three years.

“The intensive, demanding nature of our work means that vehicles can quickly become tired,” continued Mr Stevenson. “While they’re in service, though, it’s essential they’re always in the right place at the right time. I’ve every confidence that our new tipper will live up to the FUSO brand’s reputation for toughness and reliability.

“While Bell supplied the chassis from stock and at short notice, we were able to design the body to our precise specification, so that it incorporates a number of detail features which mean it is perfectly customised to our requirements. As a result, despite the initial reservations you’ll always get when implementing any kind of change, the vehicle has been very well received by those colleagues who are now using it.”

He added: “Bell Truck and Van’s Truck Sales Executive Craig Graham provided an excellent service. The communication was clear, consistent and honest throughout, which is all we would ever ask for.

“These are still early days, of course, but our initial perceptions of the Dealer are entirely positive. So, providing its pricing is competitive, we’ll certainly be giving Bell Truck and Van the opportunity to maintain our Canter.”